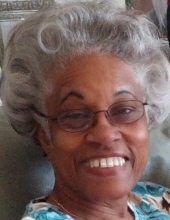 I am writing today as Roberta about my friend Edwina Edwards Johnson.

I was waiting for lunch to go last week, watching people meander past the dessert case to get into line. Two women passed by and one of them reminded me of Edwina. As I sat there phone in hand, I Googled her name and at the top of the page was her obituary. She had been on my mind for some time. Her emails had been returned undelivered. I hadn’t spoken to her in several years. When I left York the last time in 1996, we would speak more often but as with most things life got in the way. As it turns out, I probably wouldn’t have been able to reach her had I tried since, according to her obituary she had moved from York in 2015.

The photo is from her Obituary at Boulding Mortuary, York PA . There was another in the York paper but this one is much more detailed.

Edwina worked in MIS at TG&Y. She transferred with McCrory and after leaving McCrory, worked for the York school system.

Edwina was one of the most kind, caring, considerate and upbeat people I’ve ever met. This says a lot because I’ve known many people, most from my days with TG&Y, with those qualities. When I moved to York she welcomed me with open arms. Bill and I had dinner on several occasions with she and John, but for some time, both Bill and John traveled so we had girl time. Bill and John passed within a few years of each other.

We would have long talks about a variety of topics. Edwina was born the same year as my father. I never really saw an age difference and we always enjoyed our time together. I always learned something from her. I remember her vintage red velvet living room furniture and how she always made me feel at home.

Edwina took notes in shorthand. Yes, shorthand. She frequently had a steno pad full of shorthand notes. She inspired me to learn shorthand but it never took. I probably still have the book on a shelf somewhere. Maybe I’ll give it another try.

Our prayers and condolences to the family of Mr. Jarvis Dennis, former Vice President of Transportation and Warehouse for TG&Y.Â  Mr. Dennis passed away on January 28, 2014.Â  He was 82. Services for Mr. Dennis will be at New Covenant United Methodist Church on January 31, 2014 at 2:00 p.m.Â  Arrangements are being handled by…

Jim Kettler posted to the reunion Facebook page that Bob Ramsey died on December 17, 2012.Â  Bob attended many of the reunions and if you look closely, you’ll see him in the header for this site.Â  The obituary is in the Daily Oklahoman and you can see it here:Â  Bob Ramsey ObitÂ  Once again, you…

View the calendar of events for updates and to let us know you’re coming.

It seems that we’re having too many of these lately but Jim Kettler told me about Marge.Â  This is the obit link, not sure how long it will stay up. Our condolences to Marge’s family.

Our condolences to the family of Mr. Jung.Â  Mr. Jung was a toy buyer and worked for TG&Y for 23 years. Â He had attended several reunions in the past but had missed the last two.Â  He always had a smile and talked with everyone. Services for Mr. Nick Jung, Â 94 passed away on July 5,…

Â Sandra Walls provided the following information about the passing of Gilford Roat on June 13, 2015.Â  The partial text has been shown below for when the link no longer works. Posted by TG&Y Reunion on Friday, June 19, 2015 “Butch” RoatJuly 21, 1943 – May 29, 2015 OKLAHOMA CITY Gilford Eugene “Butch” Roat went to…